In economics, the “velocity” of money refers to the relationship between the growth in money and the growth in nominal GDP. Another way of putting it, the velocity is the rate at which money changes hands. The Quantity Theory of Money assumes that the velocity is a constant, which means that nominal income is largely a function of the money supply. However, if the velocity is not constant, it becomes difficult to use monetary aggregates as a guide to monetary policy. This is especially relevant for Bangladesh Bank, the central bank of Bangladesh, which employs monetary aggregates as nominal anchor for its monetary policy. 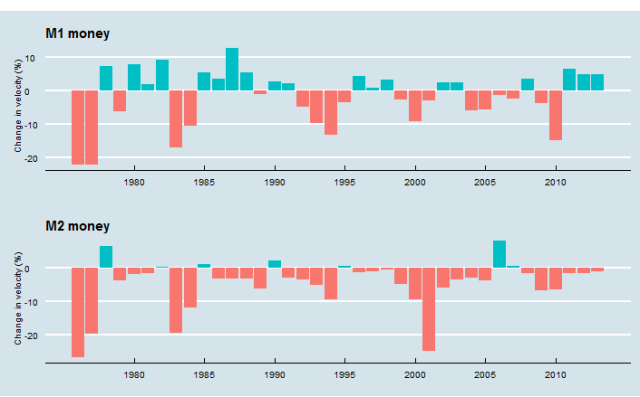 In recent years, however, velocity appears to have more moderate fluctuations. This may be partly due to the improved communication between Bangladesh Bank and financial markets in recent years. Since 2006, Bangladesh Bank has regularly published half yearly ‘monetary policy statement’ reflecting the Bank’s monetary policy stance over the immediate future. However, the fact that velocity is not fully stable implies that the link between the money supply and nominal GDP in Bangladesh may have broken down. This may make it hard for Bangladesh Bank to meet its policy goal as targeting the growth of monetary aggregates. In fact, unstable velocity was a primary reason for abandoning monetary targeting as a policy tool in the UK and the US in early 1980 (see here).

An unstable velocity further suggests that the supply of money is not the only factor (as argued by the Monetarists) that determines prices. Indeed, past and recent research have shown that both monetary and non-monetary factors are relevant for the inflationary dynamics in Bangladesh.

Monetarism has made a surprising comeback during 2007-2009 financial crisis years in the form of aggressive money printing by major central banks (e.g., Federal Reserve) to stimulate economic growth. However, even with so much of additional money, inflation may not increase proportionally due to leakage (i.e., US dollars flowing abroad) and/or globalization. After all, the Quantity Theory of Money holds only in closed economies.

This entry was posted in Bangladesh, Monetary policy and tagged Bangladesh Money Velocity. Bookmark the permalink.

2 Responses to Money velocity in Bangladesh